On November 8, thousands of Jews across the state of California went to the ballot box and voted with their Jewish values.

Equipped with their Bend the Arc 2016 California Voter Guide, Jewish voters in California cast their votes to ensure that the progressive taxation policies that helped bring the state back from fiscal turmoil will continue and enacted policies to reform the criminal justice system. Bend the Arc took definitive positions on 15 of the 17 ballot propositions, and we won an astounding 13 of them: 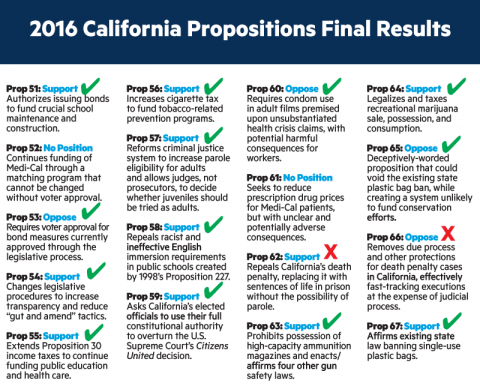 The process for creating the voter guide began in June, with local leaders from across California gathering together to discuss the consequences of the 17 propositions. After weeks of in-person discussion and in consultation with both legal and faith experts, Bend the Arc's leaders wrote positions for all 17 of the propositions, clearly outlining the organization's position and a recommendation for how to vote based on the moral values that we hold as American Jews. These positions were assembled into the voter guide which was distributed to tens of thousands of Jewish voters in print and online throughout California prior to Election Day.

To maximize the impact of the voter guide, local action was needed to reach and turn out Californians to vote on our priority issues on November 8. Local leaders and Bend the Arc staff spent countless hours advocating on behalf of the propositions the organization supported. Bend the Arc volunteers canvassed over a period of seven days, knocking on over 1,400 doors in the Bay Area and Los Angeles. They also spent significant time phone banking, reaching out to over 1,200 voters over the course of two days. Across the state, leaders held house parties and attended speaking engagements to reinforce the importance of key propositions.

Two issues in particular motivated Bend the Arc and our leaders to put so much time and effort into the election. The first issue was progressive taxation reform. Four years ago, the California state budget was facing unprecedented collapse due to the great recession. Schools were closing down, teachers and federal employees were being laid off and the fiscal situation in the state was becoming bleaker by the week.

At that time, Bend the Arc leaders came together and organized support for Proposition 30 — a landmark progressive taxation measure that raised over $30 billion over the past four years for schools and transformed our state budget for the better.

On November 8, California voters extended the benefits of Proposition 30 by passing Proposition 55 which will maintain progressive taxation on the wealthiest 2% of Californians, while allowing Proposition 30's regressive sales tax to expire as scheduled. This in turn means that both California's education and healthcare system will continue to be funded, within a sustainable framework of economic justice for all.

In addition to progressive taxation reform, California also voted to continue the process of reforming its criminal justice system. Earlier this fall, our work with lead partner Ella Baker Center resulted in the passing of SB 1143 — a landmark victory. Because of this multi-year campaign, youth who are incarcerated in California finally have protections from the dangerous and inhumane practice of solitary isolation.

Voters continued to build on this momentum by supporting the passing of Proposition 57, a much-needed prison sentencing reform act that adds protections for youth charged with crimes. Proposition 57 will allow adults with non-violent convictions to be eligible for parole hearings after they have completed full sentences for their primary conviction. The Department of Corrections and Rehabilitation, which runs California's state prison and parole system, can now create a system to award credits for good behavior and for participating in approved rehabilitation and educational activities that would improve chances of being paroled. These measures will incentivize rehabilitation while reducing unnecessary spending.

Of course, not all of the recommendations outlined by the 2016 Voter Guide were successful on Election Day. Most concerningly, Californians voted against the passing of Proposition 62, which would have resulted in the repeal of the state's death penalty. Californians also voted in favor of Proposition 66 which essentially removes due process from death penalty cases and allows the state to fast-track executions. We are both concerned and alarmed by these results and will continue to advocate and agitate for a more just criminal justice system in which the incarcerated are given humane and due process.

Despite this setback, we are overjoyed that California continues to take a bold, progressive stance towards its politics and that the majority of the state supports a continued evolution in the machinery of government. As our nation stares into an uncertain future, we hope that California can serve as an example of how progressive policies, grassroots mobilizing and advocacy can transform a state into a leading example of open and just democracy.

You can get involved in our ongoing local work on these issues by contacting our Bay Area organizer, Leili Davari-Britton, or our Southern California organizer, Anjuli Kronheim Katz.