As co-chairs of the California Voter Guide committee, Bend the Arc super-volunteers Karen Ben-Moshe and Doug Mirell help lead a savvy group of leaders who spend their summer researching and debating the finer points of the statewide ballot propositions that will be on the California ballot on November 8.

Stay tuned for the culmination of the committee’s work, with the release of Bend the Arc’s 2016 California Voter Guide in late September. In the meantime, we asked Karen and Doug a few questions about how the guide is created and what issues Californians can look forward to voting on when they head to the polls. 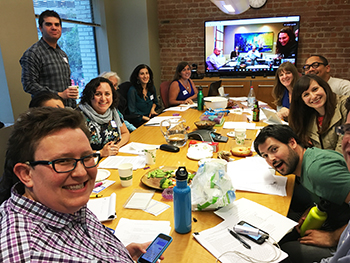 The committee meets this summer to discuss the 17 propositions on the California ballot in November.

Karen: So much great information! We provide background information and a progressive Jewish perspective on the 17 state propositions, which ask voters to decide state policy on topics ranging from marijuana legalization to good governance to plastic bags to criminal justice reform.

2. Who are the volunteers who come together to create the guide? What kind of knowledge do they bring?

Karen: The volunteers are savvy social justice activists from northern and southern California who bring all sorts of different knowledge. It's a group of really smart, committed people — some work in areas related to the propositions such as a criminal justice reform or education and then some are just really committed to helping voters make a good decision. It's been essential to have a few folks who bring a background in Jewish text. And, of course we've got a few lawyers in the mix, too!

Doug: Some were veterans of this process – whose involvement dates back to the initiation of this project by the Progressive Jewish Alliance, one of Bend the Arc's legacy organizations. Others were first timers whose enthusiasm was infectious.

3. With 17 (17!) propositions on the ballot, how does the committee wade through all the issues and decide on recommendations?

Karen: Not easily! We try to figure out whether there are any propositions that are more "obvious" — for example, those that we've already supported in some way or where our position is clear, versus others that require deeper analysis.

Doug: Committee members worked in teams of two to assess each proposition by researching its provisions and critically analyzing the arguments propounded by each measure's proponents and opponents. Each team then prepared a preliminary report and recommendation that was discussed at length by the committee as a whole before being shared with the Bay Area and Southern California Regional Councils of Bend the Arc for their final approval, with involvement of some national board members and staff along the way.

4. What kind of research does the committee do on the propositions?

Doug: In addition to reviewing the language of the proposition itself, committee members investigate the history underlying the subject matter of each proposition — including whether this was a measure that had previously been submitted to voters and/or considered by the state legislature. The arguments of proponents and opponents are carefully scrutinized to determine whether they accurately identify a problem that actually exists and whether the proposition presents an appropriate solution to that problem.

Karen: It's really important that the committee uncovers things that someone might not realize when they read the proposition title. Many of the propositions are worded in ways that aren't intuitive. Often a measure is likely to create unintended consequences and we need to describe that clearly to voters.

5. There's the famous phrase: two Jews, three opinions. How does the committee work through different viewpoints on some of these complex propositions?

Karen: So true. The good news is, that it doesn't happen all that much. And when it does happen, we try to spend as much time as possible on those propositions where there isn't agreement to reach a solid decision.

Doug: In particular, the two committee members who worked on Proposition 61, the prescription drug initiative, were divided. That division was likewise reflected in the vote of the full committee, thus yielding a "no position" stance. However, when such differences arise and the committee is unable to reach a consensus view, we endeavor to present an objective, detailed assessment of the arguments made by the proponents and opponents which hopefully will allow those reading the voter guide to intelligently reach their own informed decisions.

6. Were there any propositions that surprised the committee as you explored the issues deeply?

Doug: From my perspective, one of the more interesting discussions we had concerned Proposition 60, which would require male performers in the adult film industry to wear condoms. While the instinctual reaction of many of us was to support this initiative as one which would protect public health and safety, the claims of this measure's proponents proved to be overstated and countervailing concerns about an array of unintended consequences ultimately resulted in a unanimous vote to oppose this proposition.

7. Which issues on the ballot is Bend the Arc most eager to see pass or fail at the ballot in November?

Doug: Each year, the process we have undertaken seems to have become both more transparent and one which dynamically involves a greater number and diversity of Bend the Arc's members.

Karen: In a lot of ways I think what's on the ballot really reflects many of the issues that are important to Californians. A few years ago, at the height of the drought, there were a number of propositions related to water. Now, we're seeing many propositions related to criminal justice reform, which is something on the minds of many progressives.

Doug: Before I helped co-found the Progressive Jewish Alliance in 1999 (a legacy organization of Bend the Arc), I volunteered with another Jewish organization in Los Angeles. When Proposition 227, which sought to effectively ban public school instruction in any language other than English, qualified to appear on the 1998 statewide ballot, I asked that the organization debate the issue. But the debate was not allowed to occur for fear that any position we might take would antagonize potential donors. Consequently, I noisily resigned from the organization in protest and Proposition 227 went on to pass. I am enormously pleased that Proposition 58, which would repeal Proposition 227, has made it onto this year's ballot; I sincerely hope that California's voters will repair their 18-year-old folly by voting YES and allowing non-English languages to again be used in public education instruction.

Karen: I'm really excited about the cigarette tax proposition this year (Proposition 56). Cigarette taxes work — they stop kids from starting and get smokers to reduce or stop smoking. We've saved millions of lives through tobacco policies and not only will this reduce illness and death from smoking, but raises money for a host of social programs. Personally, I dislike the propositions where I think the legislature could really handle the decision better than what the proposition system is able to do. Some of the proposition topics are incredibly complicated and in those situations, I would prefer to trust our system of representative democracy. In the meantime, I'm glad there is the Bend the Arc Voter Guide to help support voters!